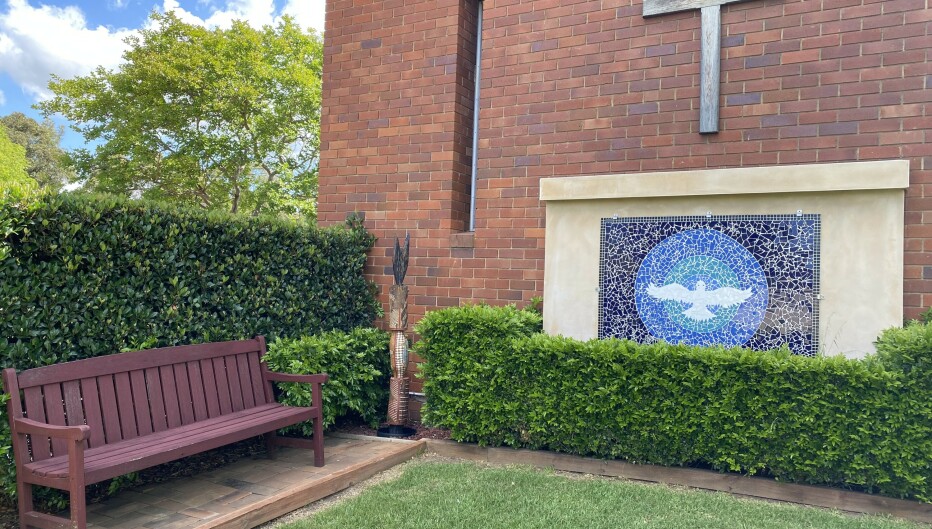 On Wednesday May 22, 2013, Mr Joe Madrill spoke to the school community explaining the symbolism of the Pukumani Pole which is in our memorial garden. The Pukumani Pole is in remembrance of his son, our friend Bastien, who died on April 26 2012. Bastien was a member of our Year 10 group.

The Tiwi islands include Bathurst Island and Melville Island. They are located 100km north of Darwin. Tiwi art and language are remarkably distinct and often appear to be abstract. With the strong use of patterns and colours, Tiwi art is highly striking. Ceremonies play an important part in the Tiwi Island culture. There are 2 main ceremonies performed, and annual one, the Kulama ceremony and the Pukumani ceremony. The Pukumani ceremony occurs approximately 6 months are the deceased has been buried. This is regarded of the most important ceremony of a person’s life in the world of the living. Even though the Mobuditi (spirit of the dead) has been released the person existence in the living world is not finished until the completion of the ceremony. The ceremony ensures the Mobuditi goes from the living world into the spirit world.

Prior to the ceremony tall totem poles are carved. The poles symbolise the status and prestige of the deceased. The actual carvings, and the artwork on this Pukumani pole were not completed by the same person. Three Tiwi people each told their own story. A Tiwi male elder carved the pole, a Tiwi female elder painted it and another Tiwi female artist completed it by adding Bastien’s personal totems on it. The long neck turtle is Bastien’s family totem from the Tiwi Islands and the kookaburra is give a totem by Joe and Claire for Bastien’s dreaming. Each carving and artwork appearing on the pole represents its own story and has different cultural meanings behind them.

The pole is sacred and holds not only Bastien’s spirit but also that of his ancestors. This is an extremely cultural and traditional pole that is to be respected. Pukumani means taboo, it is the possessions of the dead. To taunt with the pole is to disturb the spirits, which is seen as forbidden. The pole is a gift to the spirits from the Tiwi Island people.”

This school is deeply grateful to the Madrill family for this significant and beautiful gift.